Games on this hardware are becoming incredibly hard to find...
Having finally managed to get a working boardset after a long and costly struggle I've decided to design a multi kit.

Of course I had to patch games first:
- R-Type to run on the 'standard' M72 romboard
- All other games to get rid of the security chip
- Dragon Breed/R-Type/X-Multiply to use the same memory map as other games

Here are the routed PCBs: 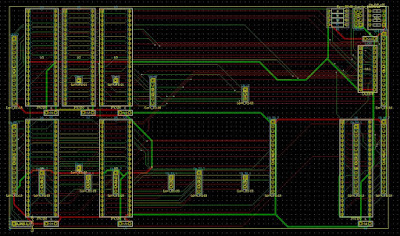 Looking forward to doing more tests when receiving PCBs but I expect some problems regarding sound samples playing for some games (should be fixeable with some more ROM hacking).

This board was sent to me in order to convert it to Space Invaders. Owner said it should work...

Upon reception I quickly noticed 2 things:
- all ROMs were pulled
- one chip was missing on the sound board

By looking at pics online I found the missing chip was a NE556 however I had only NE555 in my stock so installed a socket and waited for the part to come in the mail. 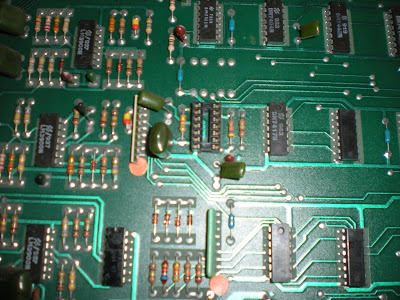 Then I strapped to board to use a single 8kB chip for the program ROM (really quick and easy to do and saves you the hassle of rotten sockets) and installed a DIP28 socket for ROM H instead of the DIP24 originally installed. I also merged the 4 Space Invaders files together and burnt the resulting file in a 27C64 EPROM, installed it in the socket and powered the board: game was stuck on a garbage screen with lot of flickering dots. For sure there was something wrong with RAMs.

I pulled the EPROM and looked for the solid lines pattern those boards should display when no program is executed: only garbage and flickering dots. Probing the RAMs revealed at least 10 (out of 16) were bad. I simply pulled them all and ordered 16 new ones for the peace of mind. 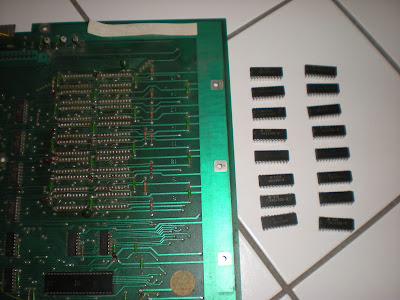 The next week the fresh RAMs showed in the mail: I installed DIP22 sockets (best move ever) and saw a lot of improvement in the pattern screen with some solid lines but also still a lot of incompletes/flickering lines. I probed the RAMs again and found 7 were bad. Upon inspection I discovered those NOS RAMs ware more likely pulled parts... Unfortunately it was too late to make a claim (I ordered them months before getting back to the repair). I ordered some more from a different place (did I tell you they are becoming crazy expensive because of rarity these days?). Rince and repeat: 10 chips received, 5 bad... Ordered again from a third seller, much more expensive than the 2 previous ones. This time out of 6 ordered chips I received 6 working ones (you get what you pay for...).
This time I finally got 16 good RAMs installed on the board (and one spare):

Yes it's been done by several people before.
However every time I've tried to contact one of them to buy one of those memcard they were never available or had no answer at all...


All the needed information can be found there:
https://wiki.neogeodev.org/index.php?title=Memory_card


I simply routed a very simple PCB (FM18W08 FeRAM and one switch to select between two 32k banks, each being equivalent to 8 original memcards regarding capacity): 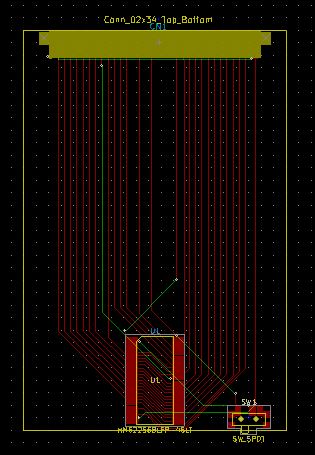 Now waiting for the bare PCBs to come in the mail.
Publié par Apocalypse à 11:35 No comments:

A collector (let me know if you want to be named here) came to my rescue... Again!

I sent him the files to convert Tetris Plus, originally using a ss92046_01 security chip, on ss92047_01 security chip. As he already owned an original Tetris Plus romboard it was only the matter of swapping all ROMs except the 2 used for background and texts graphics.

After few days of remote troubleshooting we finally had success: 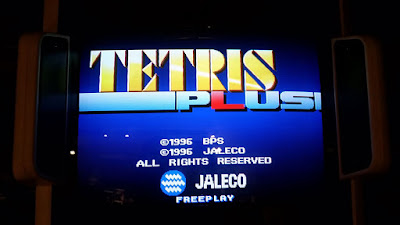 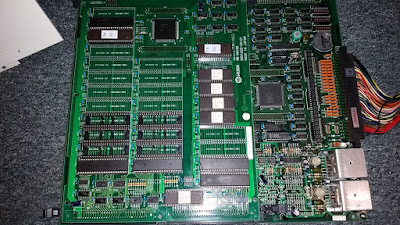 I've updated my script and now any game can be converted to work with any security chip by a simple click on a button.

Next conversions requiring testing are on Jaleco Mega System 1 (isn't it logical after Mega System 32?).