Board had apparent corrosion damage. 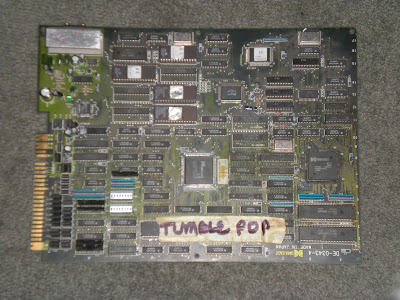 Surprisingly on boot up it worked mostly fine, only sprites were a diagonal garbled bar: 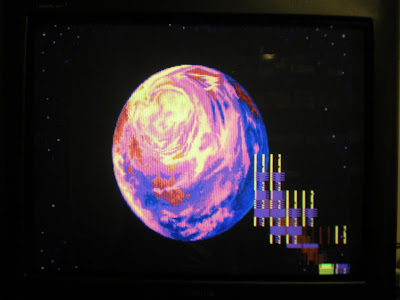 I probed the board and found two data lines on one of the sprite RAM were stuck low. I pulled it but it tested good. I continued probing the board and finally found a missing input on the LS157 @D4 (pin 3, signal I1a). I tried to followed the trace but it then disappeard under the custom chip '52' used for sprite generation. By deduction I found it should be connected to pin 13 of LS157 @11A. Restoring the connection made sprites appear at the right place but still garbled:

I went back to the stuck data bits on one of the sprite RAMs, it lead me trough bus transceivers, etc. And  finally to the '52' custom chip. On the other "side" of the chip were mask ROMs used for sprites so it was double or quits. Without much hope it checked connections between the custom chip and the mask ROMs and found two data bits signals weren't reaching the '52' chip. By exposing copper just before the pads of that chip I discovered connections were lost on the last half of a millimeter before the pads. If restored connections with a bit of solder and this time sprites were fully back: