Turbo OutRun on the bench today (OutRun hardware). I really like to work on this hardware, I find it very easy to fix, design is made in a way different fonctions are made quite independent and neatly organised on the boards, THT custom chips are rock solid (and can be found on S16B motherboards anyway) and the only weakness is the PCM SMD chip which has been reproduced. That's maybe also because I've worked on those boards a lot and know them by rote.

I got this boardset as a gift from member kingau, many thanks to him.

Upon first inspection I immediately noticed a kit from Sega Resurection had been installed (standard 68k for main CPU and the 4 main CPU ROMs) in order to "desuicide" the game. Original CPU MODULE (FD1094) and ROMs were also included.

Once plugged game actually started, I could add coins and start a new game but image wasn't syncing and samples were buggy.

I probed the sync signal on connector H (bottom board) but it was missing. It's coming from a LS125 (IC91) and sure enough input was pulsing but output was dead. I replaced it and could finally play a psychedelic version of Turbo OutRun:

There was some more work needed...
Obviously there was something wrong with the palette circuitry, and probing in that area revealed IC98 (LS241, bottom board) driving the palette RAMs /WR and /OE signals had one of it's output stuck high (/WR signal of RAM IC92) meaning nothing was never written to that RAM. I installed a new one which revealed more problems:

Oops, forgot to take a picture!

This time it was a tile problem, again probing on the bottom board revealed all data signal for RAM IC64 were unhealthy. Piggybacking a good chip on IC60 (LS374) cleared the fault. Now all graphics were much better, however now I could clearly see road was missing:

Turned out both road ROMs (IC11 & IC47) had been replaced by 27C512 chips (64kB) when they should be 27C256 (32kB).
Of course that shouldn't be a problem if you double the file before burning it but here I didn't even check the content of the ROMs and installed fresh 27C256s instead, which restored the road: 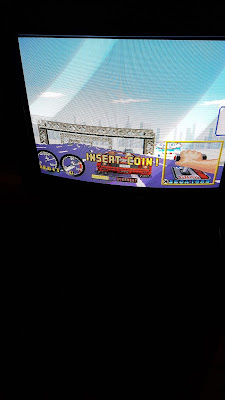 Graphics were all good... Only for few minutes when suddenly all sprites disappeared:

Some address signals were flacky on the object RAMs. Cause was a faulty LS367 (IC49, bottom board): 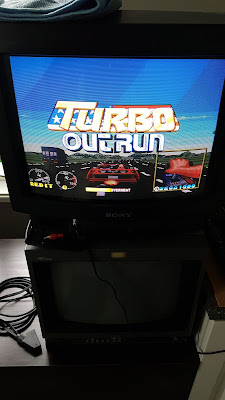 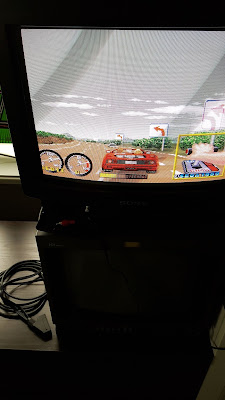 Then to conclude the repair I had a look at the sample area (top board). I quickly found one of the RAMs (IC91 , top board) was faulty by piggybacking a good one.

A handful of chips later...

P.S.: Out of curiosity I installed the OG CPU module and ROMs and surprisingly game booted without any issue!