One of those boards where bootlegs are much more common than originals.
For this particular title it's definitely better to avoid bootlegs; bootleggers couldn't reproduce the MCU and handcrafted something which is far from being faithful to the original: collision detection is buggy and some ennemies can't kill you!

Anyway, I got that board 5 years ago and attempted a repair at that time with the very few tools I had handy (note to self : a good job starts with good tools).

Game would only display a static green line at the top of the screen : 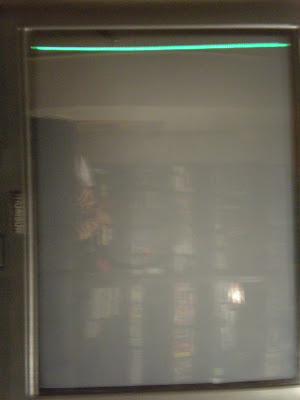 I started to probe the basics and found immediately there was no CPU activity (or only for a fraction of second). Program ROMs dumped good, however data lines were unhealthy on the work RAM (6264 type). I replaced it and got it changed nothing. I continued probing the other RAMs and found sound RAM (6116 type) was likely dead too. This time I got a coloured band of garbage on screen with pattern changing like something was alive. And it was, I could coin the game and hear sound: 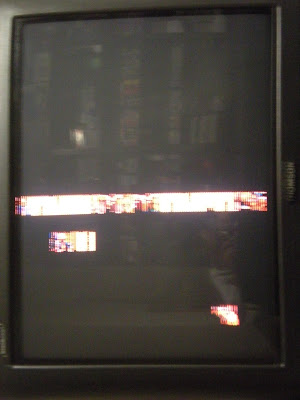 Next RAM in line was the one for video (two chips actually), where I found most address lines where actually floating. They go through four ALS169 chips which had most outputs dead. I replaced the four of them and finally got something on screen looking more or less to what it should be: 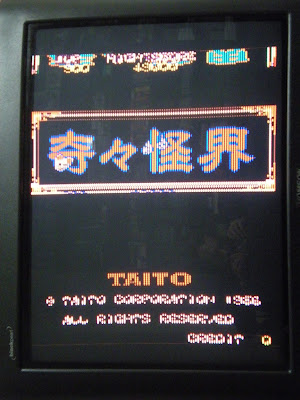 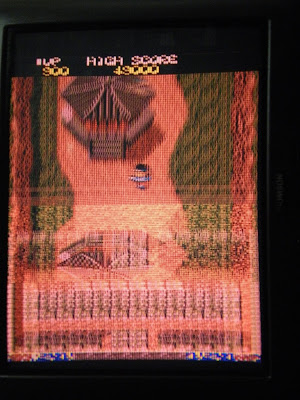 I left the repair here... And 4 years and 3 house moves later I resumed my work. Only to discover board wasn't booting anymore but was trying to display some kind of error:

Not really legible in those conditions.

An other 6 months and 2 house moves later I went back to probing... I found the two LS298s driving colour data were dead. Installing new chips revealed the following message:

Oh, it all makes sense now, after 4 years the sound ROM has developped bit rot and is now corrupted! NOT! Sound ROM dumped fine but to rule it our I burnt a new one: no difference.
In fact here's what I discovered:
- sound ROM not present or even just a single byte corrupted! = game doesn't boot, black screen
- sound RAM not present = game doesn't boot, black screen
- sound CPU (Z80) not present = SOUND ROM ERROR
Sound RAM had already been replaced and was still good, Z80 CPU was good too... The connection between those all probed OK.
There wasn't much left in line except the YM2203. It's tied to the dipswitch banks directly without any kind of external pull-up resistances and most inputs were floating: clearly the chip suffered from internal failure. Installing a fresh one fixed the game completely: